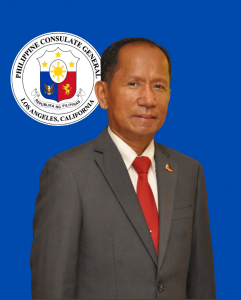 Consul General Edgar Badajos assumed his post as Consul General of the Philippine Consulate General in Los Angeles on 06 April  2021.

Consul General Badajos first joined the Philippine Department of Foreign Affairs (DFA) in 1997.  In the DFA, he has held various positions of responsibility including, most recently, as Director of the Political and Security Division of the Office of ASEAN Affairs.

Consul General Badajos is a graduate of the U.P. College of Law. He also holds a Bachelor of Arts from the University of the Philippines in Baguio.